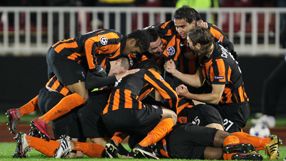 The Ukrainian title holders will win the group and progress to the knockout stage if they get a draw in their final match at home to Portuguese debutants Braga, who helped their campaign with a surprise 2-0 win over Arsenal.

Shakhtar could also go through with a defeat depending on the outcome of Arsenal's home game against Partizan, who stretched their winless group-stage streak to 11 matches with another lacklustre performance.

"The gulf in class between us and Shakhtar was obvious and it is also very clear that we are not good enough to compete at this level," Partizan's dejected coach Aleksandar Stanojevic said after his team suffered a fifth straight loss.

"The only way we can improve is if we keep playing teams of Shakhtar's quality and in order to do that we have to qualify for the group stage again next season," he added.

Partizan made a bright start on a chilly evening and came close twice in the opening three minutes, but the visitors soon found their rhythm and Olexiy Gai had Partizan keeper Vladimir Stojkovic at full stretch with a long-range effort.

It was one-way traffic after the interval as the 2009 UEFA Cup winners ran Partizan ragged with crisp passing and superior ball control on a slippery surface in front of 20,000 vociferous Serbian fans.

They were finally silenced when Stepanenko fired Shakhtar ahead in the 52nd minute. He blasted the ball into the roof of the net from close range after Partizan had failed to clear a corner.

The home team collapsed after falling behind and it was no surprise that Brazilian forward Jadson made it 2-0 seven minutes later, when he steered in a low cross by Croatia wing-back Darijo Srna from the right.

The third goal was almost a carbon copy, with Srna's Brazilian-born compatriot Eduardo sliding in after good work by Willian.

"We soaked up some heavy pressure from Partizan in the first half but after the break we demonstrated our quality and got the win we deserved," Shakhtar coach Mircea Lucescu said.

"Braga's win over Arsenal means the three-way race for two berths in the last 16 will go down to the wire and although we have the edge, we will take nothing for granted.

"We have become a soundly structured and well-organised club down the years, while our players are hungry for success in Europe and play with great motivation to prove their worth.

"Many of our former players have moved on to bigger clubs while those still here always want to show that they deserve to play in Europe's top flight."

Shakhtar's rise from relative obscurity began in 1996, when wealthy Ukrainian businessman Rinat Akhmetov took over as the club's president and his investments started to pay dividends when they won their first league title in 2002.

The five-times Ukraine champions have since had the upper hand over traditional rivals Dynamo Kiev but Lucescu said money was not the decisive factor in their rapid progress.

"We nurture a very distinguishable style of play and we believe that's what keeps skilful and talented players in our ranks," he said.

"We will continue to do that and we are confident that we will keep reaping the rewards of our hard work."