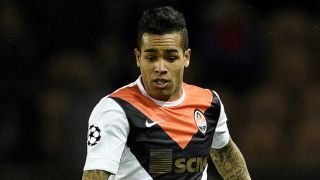 Shakhtar Donetsk forward Alex Teixeira would be honoured to represent Liverpool and says his agent is doing all he can to make a transfer happen.

Liverpool have reportedly had a bid rejected by Shakhtar, with coach Mircea Lucescu recently claiming Teixeira is worth €50million - a figure believed to exceed what was offered.

Despite the set-back, the 26-year-old hopes to secure a transfer to Anfield as soon as possible, stating his representative is seeking to help the clubs reach an agreement.

"They received one official offer from Liverpool. It was rejected. I don't know why. It was a great offer. It is frustrating, but the manager and the club president decided against it, so now I'm just waiting, trying to be patient," Teixeira told Anfield HQ.

"It's a big club. So many great players have passed through there. It would be an honour to wear the Liverpool shirt.

"I don't know, it's tough to answer [whether I will be at Liverpool in January]. I want to be there, but that is up to the club president now. I can only hope.

"I know my agent is still attempting everything possible to help me get to Liverpool."

Teixeira hopes that moving to one of Europe's elite leagues will aid his desire to break into the Brazil team and go to the World Cup in 2018.

"For me, the Premier League is the best in the world. I believe in myself, and I feel that would be the best move for my career.

"I've reached an age, 26 years old, in which I'm really looking to break into the Brazil team. World Cup 2018 may be the last I have a chance to play in, so I want to go to a big club and show what I can do at the highest level, and hopefully be selected for Brazil."

Teixeira has scored 22 goals in 15 Ukrainian Premier League appearances for Shakhtar this season, and believes he would be a useful addition for Jurgen Klopp.

"The way I play is to always look to score. I could definitely add an attacking threat, especially if I'm alongside all of the talented players they already have on the squad."