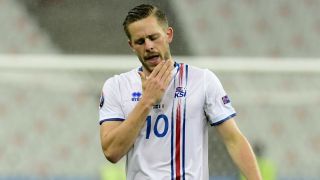 Sigurdsson has followed hot on the heels of Eidur Gudjohnsen, who was something of a trail blazer for Icelandic football in England where he spent six years at Chelsea before playing for Barcelona, Monaco, Tottenham, Stoke City and Fulham.

Swansea City midfielder Sigurdsson himself has proven a cult hero at Liberty Stadium, where he is in his second stint having also played for Tottenham.

And while those two players, as individuals, have put forward a fine case for Icelandic talent in the Premier League, Sigurdsson hopes his nation's Euro 2016 exploits are further evidence of the quality of talent coming out of the small nation.

"All of the players want to play in the Premier League," Sigurdsson said. "I think it's about being in the right place at the right time.

"If someone wants to take a chance then I would definitely say give them a go. They are good guys, good personalities and good players.

"It's been a fantastic three or four weeks for us and it’s up to the players if they want to experience this again.

"We've got the qualifiers coming up for the Russia World Cup and I hope we can go all the way there.

"I'm pretty sure [coach] Heimir [Hallgrimsson] will do a good job even if it is sad seeing someone like [former co-coach] Lars Lagerback leaving. He was part of something special."

As for his own future, Sigurdsson said he is happy at Swansea and is looking to help the club improve after a slow start to last season limited their potential, with only some good form at the back end of the year helping them to a respectable 12th-place finish.