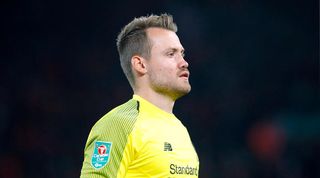 Simon Mignolet has labelled Alisson Becker a "special" goalkeeper as he reflects on his Liverpool exit.

Mignolet ended his six-year stay at Anfield in the summer, joining Club Brugge after losing the No.1 jersey to Alisson.

The Belgian made 202 appearances for the Reds in his first five years at the club, but was restricted to just two outings in all competitions last term.

Mignolet admits a desire for more regular first-team football was the key reason behind his departure, but he insists he remains a Liverpool fan.

“No, I’m really pleased for them!” Mignolet told Goal when asked whether he was jealous of Jurgen Klopp's side's lofty position a few months after his exit. “I hope to God they win it!

“I knew what I was walking away from. But I was comfortable with that. If you ask me honestly, I will say I prefer to win the Belgian League by playing every game.

“People have said I was an important figure in the dressing room at Liverpool, which is nice and is a compliment for sure. But I want to be important on the field as well, and hopefully at Brugge now I am both.

“I had been sitting on the [Liverpool] bench for a year and a half, and with Euro 2020 coming up I knew that I needed to be playing regularly if I wanted to be part of the Belgian squad.

“The more time you spend on the bench, as a No.2 goalkeeper, the harder it is to come back and play at a high level. I believe that."

Mignolet initially lost his starting spot to Loris Karius, before Klopp acquired Alisson in 2018 to be his first-choice net-minder.

And Mignolet insists he does not have any issues with his successor between the Anfield sticks.

“He’s such a talent,” he said of Alisson. “There’s nothing he needs to be taught. You know when you get those people who are just natural at what they do? That’s him.

"What do they say, 'You never forget how to ride a bike'? With him, it’s goalkeeping. He picked it up naturally and he never forgot it.

“That’s what makes him special. His footwork and his temperament are first-class, and I have to say I picked up quite a lot from him when I worked with him. He’s a good guy and a great goalkeeper.”

Liverpool will qualify for the knockout stage of the Champions League with victory over Napoli on Wednesday.

Napoli are the only team to have beaten Liverpool this season – but now they're falling apart. Where has it gone wrong?