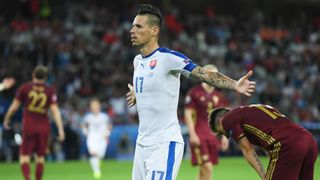 Slovakia defender Martin Skrtel hailed the quality of midfielder Marek Hamsik ahead of his side's Euro 2016 showdown with England on Monday.

The Napoli star inspired Slovakia to a crucial Group B win over Russia on Wednesday, setting up Vladimir Weiss for the opening goal at Stade Pierre-Mauroy before blasting in a superb second in the 2-1 win.

Jan Kozak, whose side sit just a point behind group leaders England after two matches, claimed after the win in Lille that Hamsik deserves to play for a bigger club than Napoli, though the 28-year-old himself stressed his commitment to the San Paolo side.

While Skrtel was delighted with the overall performance of his team as they held on for the win despite a second-half header from Denis Glushakov, the Liverpool defender admitted that Hamsik could be key to their chances of beating Roy Hodgson's side in Saint-Etienne.

"He showed how important he is for our team and his qualities, not only his goal but the whole 90 minutes, he was working for the team and did great. We hope and believe he can carry on," he said.

"You can't compare Slovakia and Russia in size, but on the pitch it's 11 against 11 and I think desire and heart was on our side. We were under pressure in the second half but we were fighting until the end for the result."

England moved top of the group with a 2-1 win over Wales on Thursday, with Jamie Vardy's equaliser and Daniel Sturridge's stoppage-time winner in Lens completing the comeback after Gareth Bale's opener.

Sturridge has drawn plenty of praise for his contribution as a second-half substitute in that win, but Skrtel is not willing to put too much focus on finding a way to stop his Liverpool team-mate.

"We have to stop England as a team, it's not only strikers or midfielders, it's 11 players," he said. "It's not only Sturridge, Vardy, [Harry] Kane. We have to be ready for them and do our best because they're still one of the best teams in the world.

"Obviously Sturridge is a good player, no doubt about it, but it could be him or somebody else. It's going to be tough but we'll be ready."