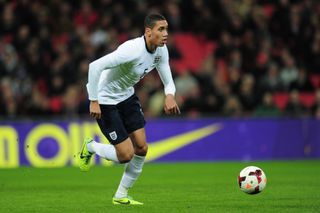 The Manchester United defender featured in his preferred position in Tuesday's 1-0 defeat to Germany at Wembley, but has also been utilised as a full-back at both domestic and international level.

With the finals just seven months away, Smalling wants to retain his place at the heart of defence.

"If that (the ability to play full-back) is a little extra thing that will get me there then that will count but I want to know I will go as centre-back - that is the main thing," he told Sky Sports News.

"Centre-back is my natural position and I enjoyed it there."

Despite England suffering back-to-back defeats at Wembley for the first time in 36 years, Smalling feels positives can be taken from the Germany fixture.

"Overall the performance in the first half was good," he continued. "The goal killed it a bit. They were a big team and they capitalised on that.

"We had good spells but we didn't make it count.

"I think Germany are one of the favourites for the World Cup.

"They are a big nation. I don't know (how far we are behind them).

"It will help sharpen us when we meet up again in March (for a friendly against Denmark). We need to be raring to go. We are looking forward to the summer."