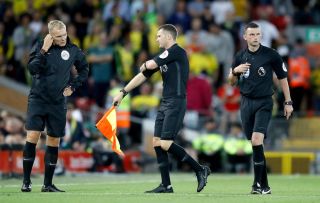 The Premier League’s first night with the Video Assistant Referee system ran smoothly at Anfield – with the only issue coming from the communication headsets.

Liverpool did not need technological assistance as they eased to a 4-1 win over newly-promoted Norwich.

And VAR’s only task on the night was to run unobtrusive checks after each goal, with no stoppage to play and no need for referee Michael Oliver to consult his pitchside monitor.

The start of the second half was delayed by several minutes due to feedback from assistant referee Simon Bennett’s earpiece, but the Premier League was quick to emphasise that the problem was “unrelated to VAR”.

There was a slight delay to the restart as the officials' headsets were repaired – this issue was unrelated to VAR https://t.co/ypLewPN2RB— Premier League (@premierleague) August 9, 2019

Bennett held the offending apparatus up to Liverpool captain Jordan Henderson’s ear as he jogged across the field, while Oliver shared a joke with officials on the sideline as he and both sets of players waited for a resumption.

The fall-back plan would have been for telephone contact with the VAR hub at Stockley Park but the necessary repairs were carried out and, with Bennett once again wired for sound, the second half belatedly kicked off at 9.08pm.

Liverpool led 4-0 at the time, with Teemu Pukki pulling one back for the Canaries in the second period as all eyes remained focused on the on-field action.