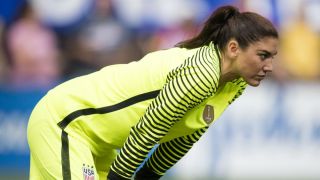 Solo has been suspended for six months and had her national team contract ripped up after making controversial comments about Sweden's players at the Rio Olympics.

The 35-year-old labelled her opponents "a bunch of cowards" after they defeated the USA on penalties following what she perceived to be a defensive performance in the quarter-finals of the women's football tournament in Brazil.

The United States Soccer Federation (USSF) deemed Solo's remarks "unacceptable" and claimed it took into account her past conduct in determining the punishment - the 202-cap veteran was also suspended for 30 days in 2015 for misconduct.

"For 17 years, I dedicated my life to the U.S. Women's National Team and did the job of a pro athlete the only way I knew how - with passion, tenacity, an unrelenting commitment to be the best goalkeeper in the world, not just for my country, but to elevate the sport for the next generation of female athletes.

"In those commitments, I have never wavered. And with so much more to give, I am saddened by the Federation's decision to terminate my contract.

"I could not be the player I am without being the person I am, even when I haven't made the best choices or said the right things.

"My entire career, I have only wanted the best for this team, for the players and the women's game and I will continue to pursue these causes with the same unrelenting passion with which I play the game."

Solo, a two-time Olympic gold medallist and women's World Cup-winner, will not be eligible for selection until February 2017.

The USSF's decision not only to suspend her but to terminate her contract has been interpreted by some observers as an indication she may not be recalled to the national team.