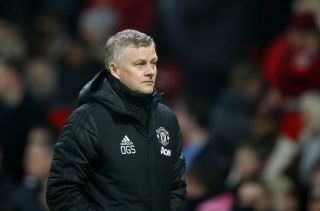 Ole Gunnar Solskjaer does not expect Manchester United to do any deadline-day business after wrapping up a deal for Bruno Fernandes.

While there is an important Premier League clash at home to Wolves to prepare for, the immediate focus for those connected to the club is on Friday evening’s transfer deadline.

Fernandes completed his long-awaited switch from Sporting Lisbon on Thursday and Solskjaer has been open about his desire to bolster his squad with a striker.

The summer exits of Alexis Sanchez and Romelu Lukaku left United light, with Marcus Rashford’s back injury heightening the need to get in an attacker in January.

Josh King, who played for the club’s reserves under Solskjaer, has been linked with a move and Bournemouth manager Eddie Howe did not rule out an exit, but the United boss is not expecting any arrivals.

Put to the Norwegian that he had said on Wednesday evening that he wanted someone that would be willing to get hurt to score, he said: “Anthony (Martial) and Marcus can break their nose as well.

“As I’ve said, January has always been difficult and it’s not just something you do like that.”

Solskjaer might not expect any more incoming business, but the United boss was reminded that he has this month said Ashley Young and Marcos Rojo were unlikely to leave before subsequently departing.

“Sometimes I say something here and something else happens,” Solskjaer said.

“Sometimes I say I am happy with a player and he gets a different message so I don’t want to help or make speculations grow more and more today.

“I expect nothing to happen but that doesn’t mean it can’t happen.”

Asked if he would be disappointed to end the window without a striker, he said: “I’m happy with the ones we have got here.

“And of course with Bruno coming in, that was a big thing for me towards the end here now that we can play in a different way maybe and of course with the centre backs coming back and what we’ve done lately with three at the back, that might be an option to tactically change things a little bit.”

🗣️ Ole on @B_Fernandes8: “He's a winner. He was a fantastic captain for Sporting and is going to come here and be a leader as well.”#MUFCpic.twitter.com/HwnTr4qrrO— Manchester United (@ManUtd) January 31, 2020

Fernandes’ arrival is certainly a big boost for United, having been short of options, creativity and goals in midfield this season.

Solskjaer confirmed the 25-year-old comes straight into the squad against Wolves after completing his big-money move on Thursday.

“It’s about timings, priorities, and also valuation, money, and you have a club that owns him,” Solskjaer said after completing the deal for an initial 55 million euros (£46.6million).

“And you can see how in January how much he means to them and they wanted to keep him. So, for us, we’re just happy to finally get it over the line.

“We’ve followed him for years but he has grown gradually that period as well. More and more mature, more and more assured performances.

This is his stage.@B_Fernandes8 🇵🇹 #MUFCpic.twitter.com/RguCXvPhLh— Manchester United (@ManUtd) January 31, 2020

“He’s a great leader of his team and, even with all the speculation that has been around him, probably every club in Europe linked with him, he’s stayed focused and played some fantastic football for Sporting.

“It tells everything how professional he is and when you get to see him and meet him here, he’s a fantastic human being.”

Nemanja Matic is suspended following his sending off in Wednesday’s Carabao Cup semi-final at Manchester City, where United were cheered on by a raucous travelling support despite losing on aggregate.

Solskjaer’s side return to action at Old Trafford on Saturday, when some fans are planning to walk out in the 68th minute in protest at how the club is being run by the Glazer family and executive vice-chairman Ed Woodward.

“For me, the fans have been backing us and I am sure they’ll back the team again,” the manager added. “They’re important for us and this is an important game for us.”