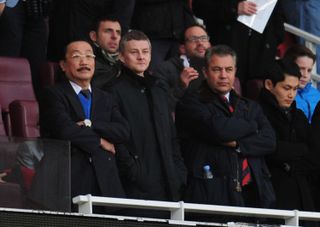 The former Manchester United striker was on Thursday confirmed as Malky Mackay's successor at the Cardiff City Stadium.

Solskjaer arrives at the Welsh club after making a name for himself at Molde, where he won two Norwegian Tippeligaen titles and the Norwegian Cup.

The 40-year-old soon emerged as Tan's first choice after Mackay was shown the door last month.

The Malaysian came in for plenty of criticism for the way he treated Mackay after he sacked head of recruitment Ian Moody before sending an email to the former Cardiff boss informing him that he could either resign or would be sacked.

But Solskjaer, who brings former United coaches Richard Hartis and Mark Dempsey with him to Wales, has been assured he will be left to his own devices by Tan and chairman Mehmet Dalman.

He said: "I had great chats with Mehmet and met the owner. They've convinced me they want me to be in charge and take the club forward.

"I don't need any more (convincing) than seeing the players yesterday (in the defeat against Arsenal) and the passion and commitment they showed.

"It was never an issue about how much money, this that and the other.

"Everything isn't exactly what it seems from the outside. There have been reports of this, that and the other in Norway as well. Don't always believe what you read in the press."

Solskjaer takes over a team just one point and one place above the relegation zone, but he has seen enough of his new side to be bullish over their hopes of avoiding an immediate return to the Championship.

He said: "I've been watching the football and passion of fans for a club that is going forward.

"There was a bit of negotiating with the family, but i think it's the right step with different challenge. Cardiff in the last few years been in the play-offs and a couple of cup finals and then promotion and now they're ready for the next step and hopefully I can help them.

"They caused problems for Arsenal, that is one of the best teams Europe. So it is very exciting."