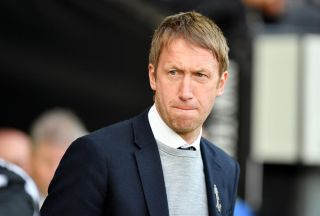 Graham Potter has been appointed Brighton’s new manager, replacing Chris Hughton who was sacked at the end of the season.

The Seagulls turned to the Swansea boss after only narrowly avoiding relegation last term.

Here, Press Association Sport looks at what will be in Potter’s in-tray at the Amex Stadium.

There was a sense that Hughton’s negative tactics, while understandable for a club still finding its feet in the Premier League, had gone a little stale, especially at home. Potter needs to inject some attacking flair into a side which scored only 35 goals in 38 matches last season.

Hughton certainly did not want to have to rely on Glenn Murray so heavily, but he found himself having to do so with the rest of his strikers flopping in front of goal. Murray remains a hugely useful option but he turns 36 at the start of next season and needs someone to share the goalscoring burden.

Get bang for your buck

9: CLOSE! The Seagulls are on the front foot again as Jahanbakhsh cuts in and fires wide! 😮— Brighton & Hove Albion ⚽️ (@OfficialBHAFC) May 12, 2019

Case for the defence

Despite Brighton’s struggles Shane Duffy and Lewis Dunk formed one of the Premier League’s most formidable central-defensive partnerships. Dunk’s form even earned him a first senior England cap against the USA in November. Keeping the duo will be vital to Albion’s fortunes next season.

Brighton’s relative success in their first Premier League season (2017-18) was built around their fine home form. Potter needs to make the Amex Stadium a fortress again.