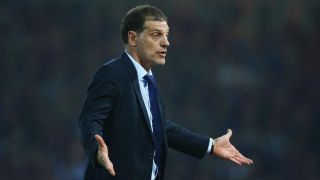 West Ham's 2016 pre-season got off to an inglorious start as they suffered a 3-0 defeat to MLS outfit Seattle Sounders in the United States.

Slaven Bilic picked a line-up that featured a mix of experience and youth, with Andy Carroll partnering 19-year-old Jordan Brown up front, while Winston Reid, Mark Noble and Adrian were the other senior names in the XI at CenturyLink Field on Tuesday.

New boy Sofiane Feghouli was the biggest name on the bench as West Ham kicked off their pre-season in Seattle.

Bilic's side showed all the signs of a team lacking match fitness, with a number of combinations just failing to come off, before the Sounders took the lead in the 42nd minute after Adrian bought down Seattle number nine Herculez Gomez, who converted from the spot.

Bilic picked an entirely different team for the second half, giving West Ham fans a first glimpse of Feghouli in their colours and he looked bright operating as an inside forward starting on the left wing.

But it did not last as West Ham's youthful side showed fatigue in the last minutes, conceding another two goals.

The exceptional Jordan Morris made it 2-0 with 20 minutes remaining when he picked up the scraps following West Ham keeper Raphael Spiegel's good save from Oalex Anderson's shot, before he made it 3-0 with his second of the game just two minutes later.