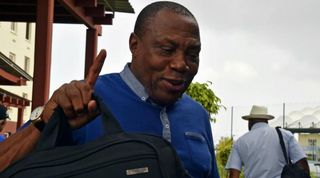 Shakes Mashaba has called for more attacking intent from South Africa as they look to bounce back from their goalless draw with Gambia when they face Angola in Cape Town.

Bafana Bafana were left frustrated on Saturday as they made a slow start to Africa Cup of Nations qualifying, failing to find a way past the Gambian defence.

Plenty of chances fell the way of Mashaba's side at the Moses Mabhida Stadium, Thuso Phala and Siphelele Ntshangase wasting the best openings.

While the point could be useful towards the end of the qualifying campaign, Mashaba expects to see more from his forward players when they host Angola in a friendly on Tuesday.

"The boys gave their best, it was just unfortunate they could not score," the coach said after the stalemate.

"We started like a house on fire but we were coming straight at them, thus playing into their hands and they dealt with us.

"But in the second half we used a lot of width and they couldn't cope but the goals still did not come.

"Again we created a lot of chances but can't score – in fact I counted about 12 chances in the first half alone - it is something we really have to work on because it is a South African problem.

"We play good football but without goals it doesn't matter, we have to seriously do something about this but we can't solve it at national team level, we have to get it sorted at grassroots level."

Their record against Angola provides some solace given they have never lost in their seven previous meetings – winning three, and scoring eight goals in the process.

Siyabonga Sangweni and Lehlohonolo Majoro gave them a 2-0 win in the last encounter at the 2013 AFCON, but Angola are unlikely to roll over on Tuesday.

Romeu Filemon's side come into the game with one defeat in their last six, and buoyed by an emphatic 4-0 win over Central African Republic in qualifying at the weekend.