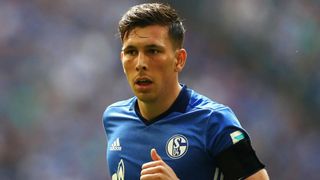 Pierre-Emile Hojbjerg has completed a move to Southampton from Bundesliga champions Bayern Munich on a five-year-deal for an undisclosed fee.

Hojbjerg is the second signing Southampton have made in the close-season having already brought in winger Nathan Redmond from Norwich City.

The Denmark international made his debut for Bayern in 2013, becoming the youngest player to appear for the club in the Bundesliga, but has since had loan spells at Augsburg and Schalke.

He made 30 appearances for Schalke last season and will now look to establish himself in the Southampton midfield under new manager Claude Puel.

"I'm very pleased. It's a big opportunity for me. I look forward to giving what I have and what I can to the club. They have put trust in me and I want to show them that they are not wrong," Hojbjerg told Southampton's official website.

"I hope I can come here also and be a part of the Southampton family and give what I have to fight for the club and fight for my team-mates."