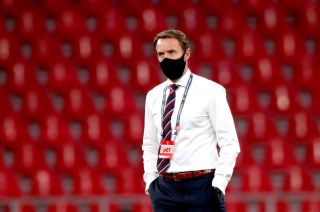 Gareth Southgate warned Phil Foden and Mason Greenwood that trust needs to be rebuilt before their international return, with the England manager saying he would have dropped the duo regardless of safety concerns.

Three days after making their senior debuts in the narrow 1-0 win against Iceland, the youngsters had to watch the Three Lions’ 0-0 Nations League draw in Denmark from home following their bio bubble breach.

Foden and Greenwood were banished from the squad after what Southgate called a “very serious” violation of strict coronavirus protocols, with footage emerging of the duo with local girls in Iceland.

While the England boss kept his emotions in-check in Monday’s pre-match press conference, his frustration with the pair was palpable after the clash in Copenhagen.

“Well, I’ve got a lot to think about,” Southgate said. “Trust needs to be rebuilt and that takes time.

“I think with both of the boys, I said yesterday there has to be consequences to what happened and then we’ve got to help them rebuild.

“Young people – often older people do – (make mistakes) but that doesn’t mean that you hold that against them forever.

“They’ve got to have a chance to rebuild and with the spotlight that’s on them, with what they are having to go through at the moment, with what their families will be having to deal with, then that’s an incredible ordeal for young people.

“I don’t think you can underestimate the impact that will have on them.

“So, I have to try to help with their club as well, that rebuilding process.

“But also be very clear to them and all the other players the expectations and the responsibilities when you wear the Three Lions and the importance of that pride in the shirt and everything that means.”

Asked how shocked he was about the incident as details become clearer, Southgate said: “I don’t really understand how players could’ve felt that was acceptable. That is a puzzle to me at the moment.

“But what’s clear is that we talked about a Covid breach and initially that was 100 per cent what we needed to take control of.

“We had to act quickly, make sure that we got the right decision.

“Clearly what’s emerged since has meant that whether there had been a Covid situation or not, we’d have been sending the players home anyway.

“Everybody else needs to understand that that’s not going to be tolerated within an England camp.”

Southgate says it has been “mayhem” for three weeks given everything that has been going on, but the youngsters’ actions only strengthened his resolve to take something from Denmark.

“Pretty normal week as far as I can see with England,” the Three Lions boss said. “No, I’m resilient to it.

“I was determined we were going to leave here with something.

"We’re in a position where we’re returning to @wembleystadium with the group in our hands."— England (@England) September 8, 2020

“We weren’t going to come out, be loose and frivolous and fold because of everything else that has been going on.

“We were focused on the job. We were a strong team of men. We needed that.