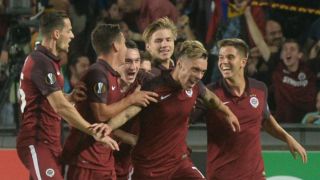 Striker Vaclav Kadlec scored twice in the first half of a contest in which Sparta were given an easy ride by an Inter defence that looked vulnerable throughout.

Rodrigo Palacio pulled one back for the visitors in an improved second half, but the game ended miserably for Frank de Boer's side as Andrea Ranocchia was sent off and Mario Holek scored late on to make it 3-1.

Victory over Inter gave interim Sparta coach David Holoubek a dream start to his time in charge, which began after Zdenek Scasny was sacked in the aftermath of a 2-0 defeat to city rivals Slavia.

Last year's Czech First League runners-up were billed as a club in crisis ahead of the game but it was Inter who looked out of sorts, and any rapport De Boer had built with Inter fans after three wins in their last four Serie A games felt rather fragile at the end of another sorely disappointing European performance.

Inter were caught out in the seventh minute when Felipe Melo misjudged what looked like a simple interception, allowing Borek Dockal's pass to roll through to Kadlec, who drilled the ball low into the corner of the net.

De Boer's side lacked shape and confidence early on and Jeison Murillo twice gave his team-mates a scare, first getting needlessly caught in possession by Dockal and then almost gifting the hosts a penalty after felling Kadlec.

However, with 25 minutes gone, Martin Frydek's simple free-kick found Kadlec completely unmarked and the striker was allowed to stride into the box unchallenged before slotting past Samir Handanovic.

Only a timely interception from Murillo stopped Ales Cermak making it 3-0 in a nightmarish first half for the visitors, as he raced to meet a Kadlec delivery that flashed across goal.

Daniel Holzer created a similar chance for Vyacheslav Karavayev early in the second half as Inter's porous defence showed little sign of firming up.

Kadlec should have had a hat-trick when he beat Murillo for pace and clipped a shot over Handanovic only to see the ball clear the crossbar, but Inter at last began to gain a foothold on proceedings.

Antonio Candreva offered some creativity with a good cross that Eder headed over the bar, before Palacio dragged Inter back into the game 19 minutes from time.

The Argentine forward played a one-two with Eder to cut through Sparta's defence and he placed his shot into the corner of the net, giving Tomas Koubek no chance.

Inter's comeback was short-lived, however. Ranocchia was sent off for a second bookable offence and when Ondrej Mazuch headed Kadlec's free-kick back across the face of goal, Holek nodded into an open net to wrap up a fine victory for Sparta.