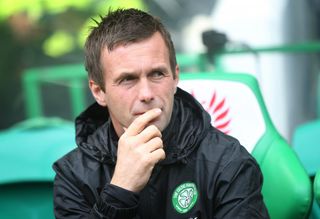 Ronny Deila's side found themselves behind immediately at Dens Park on Sunday as James McPake's first-minute header gave the hosts a dream start.

The leveller did not come until Leigh Griffiths fired home in the 55th minute, with neither team able to find a winner.

A draw means Celtic have now collected only seven points from four games, with this result coming on the back of a 1-0 loss to Inverness Caledonian Thistle and an exit from the UEFA Champions League in midweek.

Things could not have started much worse for Celtic, McPake rising highest in the box to head home Philip Roberts' corner.

The game took on an end-to-end nature thereafter as both sides spurned opportunities.

But Celtic equalised just after half-time when Griffiths' effort deflected off Thomas Konrad and into the net.

Dundee almost went back in front afterwards, Martin Boyle forcing a fine save from Craig Gordon.

The home side were relieved to pick up a point by the end, Celtic's Anthony Stokes rattling the woodwork late on.