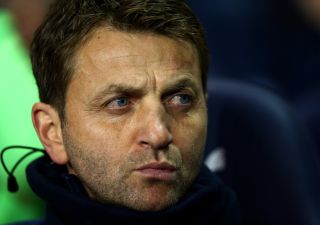 Sherwood, who took over from Andre Villas-Boas last month, has guided Spurs to four victories in his opening five league matches.

However, when questioned on whether he would be prepared to sell during the current transfer window, Sherwood appeared to place a number of his players in the shop window.

"Yes, absolutely," he said. "As long as they're the players I don't want to take us forward, then I'm happy (to sell them).

"But it's sometimes a case of supply and demand. We've got fantastic players here at the club and if we were to lose no one I wouldn't be shedding any tears, but you can only go with a certain amount of players and the pressure's on because it's a World Cup year for a lot of these players. It's important that they're playing.

"We can't guarantee that they're going to get maximum game time, but we certainly won't be leaving ourselves short."

Reported Napoli target Etienne Capoue, a summer signing from Toulouse, is among those to have been linked with a move away, and Sherwood has not ruled out a transfer for the Frenchman.

"I think (sporting director) Franco (Baldini) might be working in the background regarding a lot of transfers," he added. "I've heard nothing concrete. He (Capoue) is a new player so he's obviously one that I've read a lot of speculation about.

"We have never had an issue between us. The fact is I'm still getting to know some of these new players and I know the other ones better."