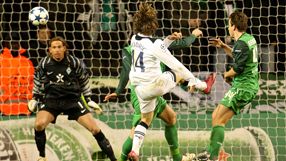 Spurs' performances in the play-off round and in their four previous Group A matches have been full of unlikely fightbacks, dramas and personal heroics, capturing the attention of Europe because no one is ever quite sure what will happen next.

Their seven matches, including two in the playoff round, have produced 32 goals.

Wednesday's strikes from Younes Kaboul, who scored after six minutes, Luka Modric on the stroke of half-time and Peter Crouch with 11 minutes to go gave Spurs a straightforward, easy victory over their injury-ravaged German opponents who were eliminated.

The only wobble came after 54 minutes when Gareth Bale, who inspired Spurs to victory over European champions Inter Milan earlier this month, had his penalty saved by Bremen goalkeeper Tim Wiese.

Apart from that, Spurs cruised into the last 16 and left manager Harry Redknapp a happy man.

"Overall, it was another great night for us," he said. "We have played some great football here this season, scoring four against Young Boys and Twente, three against Inter and three again tonight.

"At first all I wanted to do was get through the play-offs, and into the group stage. Now if we go to Twente in two weeks and win we can finish top of the group and then I'd like to go as far as possible."

Bremen coach Thomas Schaaf believed Spurs could progress as well, saying: "They are a very good team with good individuals and a good squad with a very good harmony. If they get a good draw, they will go on."

Spurs are the joint-highest scorers in the competition with 15 goals, the same as their North London rivals Arsenal, and have surprisingly qualified for the last 16 before Arsene Wenger's men.

"I am sure the fans are loving that," Redknapp added. "But it doesn't bother me too much as Arsenal will qualify by beating Partizan Belgrade in their last match."

By scoring three goals for the fourth successive Champions League match, Spurs equalled the feats of Juventus (1995/96) and Bayern Munich (2008/09) as only the third team ever to do that.

In truth, Spurs could have had at least four more, such was their dominance on the night, because as well as having his penalty saved, Bale hit the bar twice and Crouch and Roman Pavlyuchenko both went desperately close to scoring more.