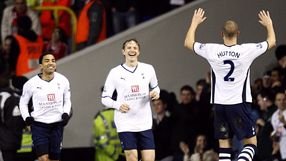 With Ramos in charge, the London club appeared to be careering headlong towards relegation from the Premier League after scraping just two points from their first eight games, the worst start in the club's history.

Since Redknapp was appointed on the same day that Ramos was sacked last month, Spurs have beaten Bolton Wanderers 2-0, drew 4-4 in thrilling fashion at Arsenal, beat Liverpool 2-1 with a late winner and then defeated Manchester City 2-1 away.

That sequence has taken Tottenham out of the relegation zone and although Redknapp freely admits there is plenty of hard graft ahead, the side's vital signs appear strong.

Add in the 4-0 UEFA Cup defeat of Dinamo Zagreb and Wednesday's 4-2 League Cup win over a weakened Liverpool side, Spurs have banged in 18 goals in Redknapp's six games in charge.

It is the best start by any manager of the club and Tottenham fans are entitled to believe that Christmas has come early at White Hart Lane.

But how exactly has Redknapp turned the club's fortunes around so quickly?

"The new manager has come in and put confidence into all our players," young striker Fraizer Campbell, who scored twice against Liverpool in midweek to put Spurs in the last eight of the League Cup, said this week.

"We go out there and feel like we are invincible sometimes. We are beating teams quite comfortably."

Redknapp does not appear to go in for complicated coaching manuals, military-style training camps, or the latest wonder diets. While he is undoubtedly an astute tactician, his secret appears to be that his highly paid, expensively assembled side are now having fun and having their egos massaged.

Even the cakes have reappeared at the training ground canteen while on the pitch, confidence is sweeping through a bunch of internationals who appeared resigned to failure three weeks ago.

When strikers Robbie Keane and Dimitar Berbatov left in the summer for Liverpool and Manchester United respectively, albeit for a colossal combined fee of more than 50 million pounds ($74.04 million), fans feared the club had taken a huge backward step.

Russian Roman Pavlyuchenko initially looked like an expensive misfit as he struggled to adapt to the Premier League, while young English striker Campbell, on loan from Manchester United, was hardly a replacement for Keane.

Redknapp has taken just over two weeks to prove that notion wrong. Bent has already bagged seven league goals this season, while Pavlyuchenko and Campbell, paired together on Wednesday against Liverpool, both scored twice.

The silky Tom Huddlestone, never really trusted in central midfield by Ramos, has started every game under Redknapp, having been selected just once by Ramos this season.

His range of passing is reminiscent of Michael Carrick's, sold to Manchester United in 2006 after Spurs went agonisingly close to finishing in the top four.