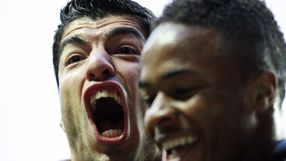 Suarez provided the assist for Sterling's deft lob midway through the first half before netting two goals himself to move second in the Premier League goalscoring charts on 15, one behind Manchester United's Robin van Persie.

"To play with him is one of the best things ever," 18-year-old Sterling told the club's website after watching on in admiration as Suarez continued his excellent form with another sizzling display against Sunderland.

"Everyone knows how good he is. With a player like that, you've just got to give him the ball and try to get in behind as he played me in today.

"He speaks to me a lot, telling me to move the ball quicker and stuff like that. In training, I try to watch him and take a few things off him," added Sterling, who made his international debut in November and signed a five-year contract extension with Liverpool last month.

Sterling said with the likes of Suarez and captain Steven Gerrard at Anfield he is learning from the best.

"As a young player, that's what you've got to do - try to take a bit off players like him and Gerrard and bring it to your own game."

Sterling's strike was his second as a Liverpool player, helping the five-times European champions move into eighth in the standings.

"We're trying to look forward now, keep the consistency going and hopefully keep going in 2013," said Sterling, adding manager Brendan Rodgers has been telling the players to make Anfield one of the most fearful places to visit in English football.

"We've been doing that in the last few weeks," said Sterling.