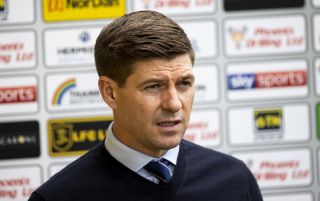 Steven Gerrard insists Jon McLaughlin does not yet have the Rangers number one slot for keeps.

It was a quiet afternoon for the 32-year old as Gers registered their fifth shut-out in as many games this term – equalling the club’s all-time record run for a new campaign set back in 1929.

But Gerrard will soon have a major decision to make on who starts in goal after welcoming Allan McGregor back into his matchday squad.

The former Scotland international started against both Aberdeen and Bayer Leverkusen before a knee injury allowed McLaughlin his chance to impress after joining this summer.

But with McGregor nearing full fitness, Gerrard anticipates a lively battle between both his goalkeepers in the months to come.

Asked if the jersey was now McLaughlin’s to lose, the Ibrox manager – whose side claimed victory with goals from Kemar Roofe and Ryan Kent – said: “No not necessarily.

“Allan has only trained twice with us and in his first session he was still getting some sensations in the knee area, so there was no need to rush Allan back at his age.

“Allan McGregor has been absolutely fantastic for me. He’s got tons of credit in the bank.

“I’ve got two number ones and I’d have no doubts about playing either of them in any game.

“It wasn’t that I preferred Jon over Allan, it’s just that Allan has missed two weeks and Jon has been training well and keeping clean sheets.”

There was a surprise place for Brandon Barker in Gerrard’s line-up as the winger registered just a sixth start since arriving from Manchester City last summer.

But Gerrard said: “I’m pleased for him. I think that’s his first full game in a long, long time with the injury problems he’s had and not settling in places.

“He’s earned his chance today. He’s trained really well. We played a bounce game against Plymouth and he was really dangerous.

“He’s showed me that he was ready for an opportunity.

“In the first half he had some real dangerous moments where he showed his pace. That’s what we want him to do, show his attributes more – and he has got it.

“It’s difficult for opposition players to handle Kent and Barker if they are both at it and on Saturday they were.”

Kilmarnock, meanwhile, are still considering whether to hand Youssouf Mulumbu a third spell at Rugby Park.

Boss Alex Dyer said: “I’m not sure. I’ve kept in touch with him, as I always do.

“Hopefully he will do some training with us this week and then we will see.”