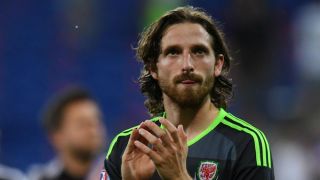 Stoke City have signed Wales midfielder Joe Allen on a five-year deal from Liverpool for a fee that could rise to £13million.

Allen joined Liverpool from Swansea City in 2012 and had also been linked with a return to his former club, but Stoke boss Mark Hughes has got his man.

The 26-year-old starred in Wales' run to the semi-finals of Euro 2016, winning a place in UEFA's official team of the tournament.

"It's been a whirlwind 48 hours for me but I am delighted to have finally been able to put pen to paper," Allen told Stoke's official website.

"I was really excited as soon as I heard of the club's interest and it wasn't a difficult decision for me to make. I am incredibly excited about my future here at Stoke City."

WATCH | First glimpse of Joe Allen in a Stoke City shirt and will meet up with the squad in Orlando tomorrow July 25, 2016