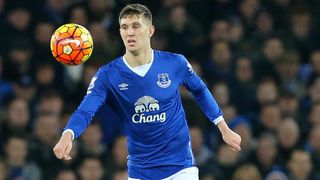 Former Everton manager David Moyes believes John Stones is destined for great things amid interest from some of the world's biggest clubs.

Stones - Moyes' last signing in 2013 before leaving for Manchester United - has established himself as a regular for both Everton and England.

The 21-year-old has started 23 of Everton's 25 matches this season, including Wednesday's 2-1 win over Manchester City in the first leg of the League Cup semi-finals, and is attracting interest from Premier League rivals Chelsea and United.

Speaking to Sky Sports, Moyes said: "This boy's coming on like nobody. He's coming on with great quality and great ability on the ball.

"He's playing with really good defenders and that's what's surprising me a bit about Everton.

"Players like Leighton Baines, Phil Jagielka...he's in with some really good players who know how to defend well, but John is different, he's very comfortable on the ball, which gives the side a good starting point.

"They like to start games from the back, but John will go on to big things, I've no doubt about that."

Moyes, who was sacked by La Liga outfit Real Sociedad in November, added: "He's improved his overall defending, he's got a natural ability to take the ball which is not something that's coached. He's reading the game much better.

"There are one or two occasions when part of being a defender is putting your foot through the ball. He did brilliantly to make himself a bit of space to clear the ball and there wasn't a pass on for him [against Tottenham].

"That's John...he'll develop and he's made one or two mistakes which have cost him, but obviously he's going to go on and play for England for a long time."