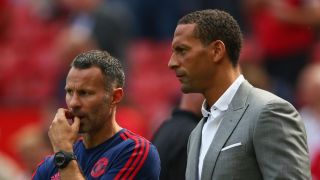 Former Manchester United stars Paul Scholes and Rio Ferdinand accused the current team of having lost their identity after the 2-0 defeat to Liverpool in the Europa League.

Daniel Sturridge scored a first-half penalty to put Liverpool ahead in the last-16 first-leg match at Anfield, before Roberto Firmino took advantage of some poor defending to add a second and leave Louis van Gaal's men with a stiff second-leg task.

Ferdinand and Scholes, both Champions League winners during their time as United players, were scathing in their assessment of the current crop's performance and called for a drastic improvement in the second leg.

Scholes told BT Sport: "Their mobility was poor, and the quality of play was shambolic. They got into decent positions at times, but there was a lack of quality and a lack of fight.

"For 20 years, Manchester United had an identity. In the last three years, they've gone away from that.

"At Manchester United there are standards. When we were players, we had great examples to live up to, set by [Bryan] Robson, [Roy] Keane, [Paul] Ince and [Steve] Bruce.

Ferdinand, who collected six Premier League medals during his time at the club, said: "You can question the manager but the players have to show some sort of fight.

"That's the most disappointing thing – there is no fight. The cohesion and patterns of play in the team are non-existent. There has to be a massive improvement next leg at Old Trafford.

"Do these players realise what game this is? Do they realise the history?"

Scholes fired a broadside at the modern trend of footballers taking to social media to apologise for poor performances, saying: "I don't want to see players tweeting how sorry they are.