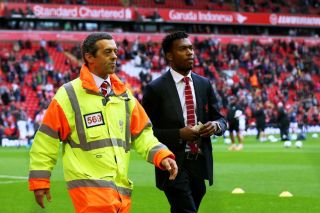 The Reds sit in ninth through seven Premier League games, one point behind fourth-placed Manchester United but only two clear of Stoke in 16th.

Sturridge has not appeared in the league since Liverpool's devastating 3-0 thrashing of Tottenham at White Hart Lane, and Brendan Rodgers' men have endured some scratchy form since.

Set to return from a month out due to a thigh injury, Sturridge can ignite Liverpool's season - with their first fixture after the international break in the form of a trip to QPR on Sunday.

"It's a massive boost," Rush said of Sturridge's return to fitness.

"We have missed Daniel, he's a quality player. With the international week, there's even more time for him to come back from his injury."

Rush referred to Liverpool's dismantling of Spurs in August, claiming the link up play between Sturridge, Mario Balotelli and Raheem Sterling was the winning formula.

"You look at the game against Tottenham, when Sturridge, Balotelli and Sterling played, there were goals in the three of them and they were absolutely fantastic," Rush added.

"It will be a big boost to have Daniel back and hopefully he can get the side going again. We had a good win in our last game, so what we're looking for now is to maintain that."

Rush said Sturridge would not suffer from any cobwebs due to his layoff, stating the former Manchester City and Chelsea man was residually fit.

"It can be difficult [to return from injury], but he has had a good pre-season," Rush said.

"I think it will be pretty normal for him; he'll get straight into it. He's a naturally fit player so I think he'll walk straight in.

"I don't think it will be a problem."