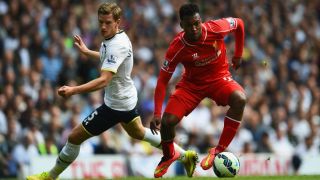 The England international last featured for the club in a 3-0 win over Tottenham at the end of August.

He was subsequently sidelined with a thigh injury sustained on international duty and then suffered another setback when he picked up a calf problem on his return to training in October.

Sturridge was again absent for the 0-0 FA Cup fourth-round draw with Bolton Wanderers on Saturday, but afterwards boss Brendan Rodgers revealed the striker was on track to play some part against West Ham in the Premier League next weekend.

Sturridge was also in upbeat mood after completing a scheduled work-out with the Liverpool squad.

He tweeted: "First day of training today with the boys. I'm a happy man."