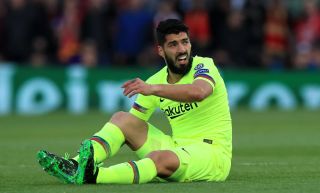 Luis Suarez apologised for the manner of Barcelona’s Champions League exit and insists the players are ready to face the “bullets” now heading for them after the failure.

For the second successive season the Catalan side threw away a three-goal first-leg lead: last campaign in the quarter-final in Rome, on Tuesday night in a febrile, hostile Anfield as Jurgen Klopp’s side scored four unanswered goals to win 4-3 on aggregate.

It was a credit to the hosts that Lionel Messi, who did so much damage in a late 15-minute spell in the Nou Camp, was restricted to an observer’s role while Suarez himself was left frustrated, with a kick-out at Andy Robertson which ended the Reds defender’s night highlighting his frustration.

Despite Liverpool’s thrilling performance and fully deserved victory Barcelona still find themselves with some difficult questions to answer, with the Spanish media labelling the defeat “The biggest farce in football” and “The blackest page in Barcelona’s history”.

“We are very sad, hurt. We are human beings, we feel the pain, the frustration. We have to do self-criticism, put our chest out for the bullets of what is coming now,” said Suarez, who endured a painful return to his former club.

“It’s the second time the same happens to us. We can not make these mistakes two years in a row, we have to reproach ourselves for what we are doing wrong, thinking that everything was finalised.

“We have to apologise for the attitude, we were not a team. To our families, our children, our fans, we have to ask their forgiveness.

“It cannot be that in a minute we concede two goals. The fourth goal we looked like youngsters. We have to understand all the criticisms that are going to rain on us.”