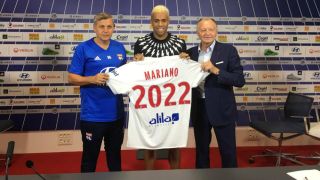 Mariano Diaz has set his sights on helping Lyon surpass Paris Saint-Germain and winning Ligue 1 after completing his move from Real Madrid.

The 23-year-old, who has signed a five-year deal after a transfer reportedly worth €8million, did not hide his ambition as he was presented as Lyon's fourth signing of the close-season on Friday.

Bruno Genesio's men finished fourth in the top flight last season, but Mariano's bold targets include his new club rising much higher than that, despite reports suggesting star forward Alexandre Lacazette is close to joining Arsenal.

"I'm at a big club and we have an important role to play in Ligue 1, which is a good championship," Mariano told reporters.

"Lyon want to win the title, surpass Paris Saint-Germain and go further in the European Cup. I am sure that we will return to the highest level.

"I am very happy to be here at OL - I knew the team before coming.

"It is one of the best in the country and even in Europe. That was one of the reasons I came. It is wonderful to be part of this great club.

"I have an opportunity to demonstrate what I am worth and I have great determination to do that."

Mariano, who will wear the number 11 shirt at Lyon, was thanked by Madrid for his "dedication and professionalism" after his move to France was confirmed.

He made his senior debut against Celta Vigo last August and made eight LaLiga substitute appearances in the club's title-winning campaign, scoring once against Deportivo La Coruna in December.

Mariano scored a further four goals across two legs of Madrid's Copa del Rey last-32 tie against Cultural Leonesa – his only two starts of the season - and leaves in search of greater first-team opportunities.

Lyon have also signed Fernando Marcal, Bertrand Traore and Ferland Mendy ahead of the 2017-18 campaign.