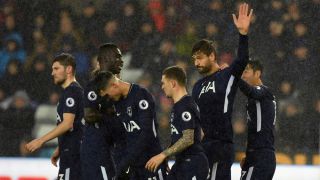 Fernando Llorente came back to haunt former side Swansea City as he started in place of Harry Kane and scored the opener in Tottenham's 2-0 win at the Liberty Stadium on Tuesday.

Llorente left Swansea for Spurs at the start of the season and was making a first league start for his new side due to Kane's recent illness, scoring early on before Dele Alli doubled the advantage with a fortuitous effort in the closing stages on a sodden evening in south Wales.

The pouring rain meant the pitch was not exactly ideal for a considered, passing approach, so it came as little surprise to see the breakthrough arrive via a free-kick, as Llorente headed in a pinpoint delivery from an offside position that went unpunished.

Chances were fairly rare for the remainder of the first half, but Luciano Narsingh, Jordan Ayew and Mike van der Hoorn all went close as Swansea rallied after the break.

30 - Awful conditions here as the rain continues to come down in Wales. We have been in control though and deservedly lead after half an hour. 0-1  January 2, 2018

However, Alli's 89th-minute effort ended Swansea hopes and Spurs secured a win that takes them back above Arsenal to fifth, while it proved to be a disappointing home debut for new Swansea coach Carlos Carvalhal.

Kane's absence did not appear to have any kind of negative impact on Spurs during the early exchanges, as the visitors wasted no time in taking control.

11 - Fernando Llorente has scored 11 goals in his last 12 Premier League appearances at the Liberty Stadium (10 of those for Swansea). Stomping.January 2, 2018

And the opening goal arrived after just 12 minutes, as Llorente met Christian Eriksen's left-wing free-kick with a glancing header to beat Lukasz Fabianski, despite being well offside.

Swansea initially failed to produce much of a response, with Spurs remaining well on top without appearing to exert a great deal of effort.

For all Spurs' possession, however, they created precious few opportunities and the only other meaningful chance that fell their way was wasted just before the break.

Another Eriksen free-kick caused havoc in the Swansea defence and Llorente rose to meet it, prodding it over from close range when it arguably made more sense to use his head.

Carvalhal introduced Luciano Narsingh – who scored the winner from the bench against Watford – as a substitute early in the second period, with Swansea looking rather more purposeful than before the break.

The visitors survived a scare when Davinson Sanchez caught Martin Olsson late and avoided a second booking, only to be withdrawn for the returning Victor Wanyama soon after.

Swansea's first genuine chance then fell to Narsingh in the 65th minute, blasting at Lloris from a tight angle after being played through by Renato Sanches.

And two more glorious opportunities went their way shortly after – Ayew thwarted at the last second by Wanyama after evading challenges from Eric Dier and Hugo Lloris, before Van der Hoorn hit the post with a header from the resulting corner.

But Swansea's onslaught came to nothing, as Kane – a 68th-minute replacement for Llorente – produced a stunning ball over the defence to pick out Alli and the midfielder netted at the second time of asking after his initial effort came back off Fabianski to wrap up a hard-fought win.