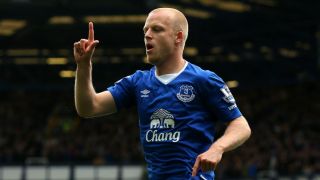 The Scotland international has been heavily linked with Norwich City during the last two transfer windows and has only started four Premier League matches this season.

Swansea are also tracking Naismith, 29, even though he is not the type of out-and-out striker they are prioritising in the January transfer window.

"There is a need to strengthen and we have got some money in the bank now, so it is important we spend it," Curtis said to BBC Sport.

"I think he [Naismith] is on a list [of targets]. I know he is a player available – he is an excellent player. Like all good players, if we can afford to bring him in, then we will be interested.

"We are still looking for that main striker. Steve is probably someone who plays just behind the main striker, but is someone we will be interested in."

Curtis also revealed that a return for former midfielder Jonathan de Guzman, who spent two years on loan in Wales and now plays at Napoli, would be of interest if he had proven his fitness.

"I think Jonathan's name has come up with the current crop of players, but I'm not sure," he added.

"He may be injured at the moment so I am not sure if he is available. Jonathan served the club well and if he was available, I am sure we would be interested."