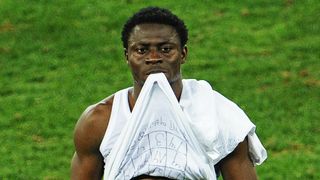 Returning striker Obafemi Martins has challenged Nigeria to prove their quality against Swaziland this week as they begin their World Cup qualification campaign in Lobamba.

The Seattle Sounders man is set to make his first appearance for the Super Eagles since March 2013 on Friday after being recalled to the national side following a 15-goal season in Major League Soccer.

Alongside 31-year-old Martins, Manchester City's 19-year-old forward Kelechi Iheanacho could debut for Sunday Oliseh's men this week as they begin their bid to reach a third consecutive World Cup finals.

Swaziland booked their place in the second qualification round with an 8-1 aggregate win over Dijibouti but Martins was bullish in his assessment of Friday's clash, which will be played on the artificial surface at the Somhlolo National Stadium.

"I have always stayed true to my country and happiness is an understatement of my feelings right now, the national team means a lot to me," he told News24.

"With all due respect, I don't expect them to pose so much of a threat but we still have to approach the game with all the seriousness it deserves, as underdogs they have nothing to lose hence they will play with freedom.

"We are an experienced side and that gives us an edge but we have to be ready to fight till the end, we can't afford to start badly."

Swaziland are ranked 130th in the world but have already shown their ability to spring an upset when they produced a surprise 2-1 win over Guinea in an Africa Cup of Nations qualifier.

As Swaziland prepare to take on Nigeria for the first time, Super Eagles boss Oliseh has shaken off a recent bout of illness to be in the dugout.

Opposite number Harris Bulunga meanwhile has warned his side to be wary of the threat Nigeria will pose, while remaining hopeful the hosts can cause another upset.

"We are facing one of the superpowers of African football so we cannot get carried away and go out and attack even though we are playing at home," he told Brila FM.

"We need to respect the Nigerian team because they are made up of mostly professional players who we watch on television, we know what they are all about and how dangerous they can be, so we need to be careful.

"This is the first time Nigeria will be in our country and everyone is excited about the match.  The general public, the government politicians even the players themselves, they are motivated and looking forward to testing themselves against these well-known players they watch on television.

"So the nation is in prayer, of course that at least in the two legs we will manage to win one of the matches. It's going to be a tough match but we believe that we can give a good showing."