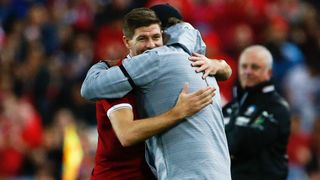 Liverpool cruised to a 3-0 victory over A-League winners Sydney FC at ANZ Stadium in a match that saw Jurgen Klopp hand appearances to four former stars, including Steven Gerrard.

Gerrard, Jamie Carragher, Steve McManaman and Daniel Agger all made 45-minute appearances as the Reds won the post-season friendly in emphatic fashion.

Daniel Sturridge put Liverpool in front early on and Alberto Moreno promptly added a second with the best goal of the game in front of a 72,892 crowd.

Roberto Firmino made it three prior to half-time, with the second half lacking the same intensity as substitutions disrupted the flow of the game.

Gerrard, who started the match along with Carragher, blazed over with an early chance on the half-volley from Firmino's left-wing cross.

But Liverpool did take the lead in the seventh minute, Ben Woodburn winning back possession deep in Sydney's half and feeding Sturridge, the striker working space for himself and firing a low right-footed shot into the far corner.

The Reds then added a stunning second after 18 minutes, great work from Firmino seeing him chip a pass into the path of an onrushing Moreno, who took a touch and flicked a finish high past home goalkeeper Danny Vukovic.

Liverpool netted again six minutes before the break, with Firmino deflecting the ball in from inside the six-yard box after Sturridge's run and cross from the right had created the opportunity.

Sturridge and Gerrard both had penalty claims rejected before the interval, prompting Jurgen Klopp to express anger at the match officials, while Sydney finally threatened when David Carney powered a shot against the woodwork.

Agger and McManaman were introduced as part of seven half-time substitutions – with Carragher and Gerrard coming off – and the second half started slowly before Trent Alexander-Arnold tested Vukovic.

Vukovic saved again from the lively Alexander-Arnold, while the keeper also denied Woodburn as Liverpool came close to a fourth.

At the other end, substitute keeper Simon Mignolet did well to keep out Chris Zuvela's effort at his near post, before Sydney youngster William Mutch somehow failed to convert Cristian Gonzalez's cross from six yards.

Mignolet, who was busier in his 16-minute cameo than starter Loris Karius had been in his time on the pitch, then kept out Matt Simon as Liverpool held on for a clean sheet, while the Reds' Alexander-Arnold saw his shot strike the crossbar.