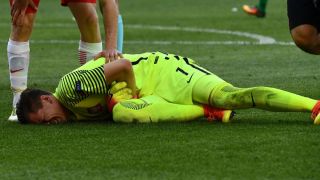 Poland will be without first-choice goalkeeper Wojciech Szczesny for their Euro 2016 Group C match against Germany at the Stade de France on Thursday.

Szczesny completed 90 minutes in the opening 1-0 win over Northern Ireland on Sunday, but sustained a thigh injury that will leave him on the sidelines for the showdown the the world champions.

AFC Bournemouth's Artur Boruc and Swansea City's Lukas Fabianski are the other goalkeeping options available to boss Adam Nawalka, who is hopeful Szczesny can return for the concluding group encounter against Ukraine but would offer no guarantees.

"There is no chance for Wojciech Szczesny to play," he told a pre-match news conference in Saint-Denis.

"The team doctor has made a decision. Tomorrow I shall announced the team and who shall play in goal.

"We cannot tell how long he will be sidelined. Hopefully he will be ready for the match against Ukraine. That is what the team doctor has said.

"I will give the line-ups tomorrow and it will tell you who will be in goal, of course."

Poland enjoyed a famous win over Germany in Warsaw during qualification and Nawalka faced West Germany twice in his playing days at international level – a 1-1 draw in the opening game of the 1978 World Cup and a 3-1 friendly loss two years later.

The former Wisla Krakow midfielder was happy to concede he has drawn on those experiences to help his players in their preparation for a mouthwatering encounter.

"I remember vividly those two games I played against Germany," he said. "One was a draw in the opening match of the World Cup in Argentina. It was 50-50, we were probably closer to winning that match at the time, but that is a subjective opinion.

"It was a very good game, a tactically advanced match at the time. In comparison it was more like a game of chess.

"The second game against Germany I don't remember so well – we lost it! I tried to take it away from my memory but it left a mark.

"Those matches will help me with the current job but what matters is here and now. I have a different role and I want to prepare the team.

"I'm not hiding that I am talking to the players a lot about those particular matches and listening to the players thoughts, using those thoughts. This is the mutual thought process that leads to us playing at our best in each match."