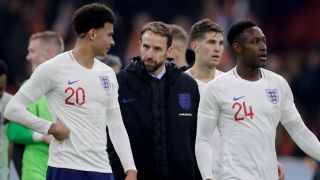 Liverpool manager Jurgen Klopp claims England have the players and a coach capable of impressing at the World Cup, but wants the country's press to stop piling pressure on the team.

England qualified convincingly for the finals in Russia after Gareth Southgate succeeded Sam Allardyce as manager, and the Three Lions have been drawn in a group with Belgium, Panama and Tunisia.

Roy Hodgson could not guide the team out of their group in Brazil four years ago, and there has been little suggestion this squad of players are capable of emulating Alf Ramsey's 1966 champions.

Klopp, though, feels the country has plenty of cause for encouragement and optimism ahead of the team's first match against Tunisia in Volgograd on June 18.

"England is a team I now have great interest in and I really wish Gareth Southgate, his staff and the team the best of luck," the German wrote in a message that was read out at the Football Writers' Association awards night on Thursday.

"Gareth is still a relatively young manager, and both for him as a coach and many of his players, I think this will be a first World Cup at senior level.

"I think as the English media you can help them - if you are minded to do so. And that doesn't mean to be 'cheerleaders' or 'ignore' failure and mistakes.

"It just means remembering they are a group of relatively young people who will be giving their best and trying their hardest to make a nation proud and happy.

"You are blessed in this country with wonderfully talented, skilful, honest, committed and tactically astute players. You are blessed with a coach who is brave and innovative.

"England has the tools - because the manager and the players have the mentality, attitude, character... it is all there for you.

"Maybe reduce the pressure a notch or two - that is where you can help I think. Maybe take the numbers 1966 off your computer keyboards for the summer and let this team write their own history and memories."

After facing Tunisia at Volgograd Arena, England take on Panama in Nizhny Novgorod on June 24, before a clash with Belgium at Kaliningrad Stadium four days later.