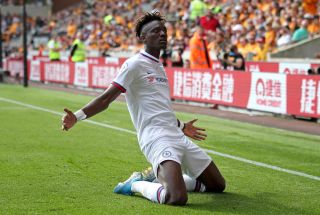 Chelsea striker Tammy Abraham has not ruled out playing for Nigeria.

The 21-year-old, who is the Premier League’s joint leading scorer alongside Manchester City’s Sergio Aguero with seven goals, has two senior England caps to his name, won in friendlies against Germany and Brazil in 2017.

Nigeria have been hoping Abraham can be persuaded to switch allegiance to them.

And when asked about the Nigeria interest, he was quoted by The Telegraph as saying: “I have heard the talks and I’ve not really been focused on that yet.

“You can never say never, whatever comes first really. It is about focusing on Chelsea and hopefully scoring goals and getting victories.”

Abraham netted a hat-trick for the Blues in Saturday’s 5-2 win at Wolves, having scored back-to-back braces in the previous two matches.

The Chelsea academy graduate has made an impact for the club this term after spending the last three seasons on loan at Bristol City, Swansea and then Aston Villa.

On Tuesday he could make his Champions League debut when Valencia visit Stamford Bridge.

And he said: “I have grown up watching big stars playing in the Champions League, and to play in it myself would obviously be a dream.

“Players like the gaffer (Frank Lampard), Didier Drogba and John Terry are great legends. They have been there and done it. I would like to follow the same path.

“I am delighted to be scoring goals for a team I have grown up loving and have always wanted to play for. It is just an amazing feeling and hasn’t kicked in yet.

“Hopefully this is the beginning of a great career at Chelsea. I’m living the dream and I need to keep it running.”

Earlier in the week, England boss Gareth Southgate said, after not naming Abraham in his most recent squad: “I think with Tammy, he’s a young player that we’ve always liked, we know he’ll score goals.

“We felt (that it was a) bit early this time, but we really can see that he can offer us something moving forward. We obviously gave him a cap back in November of 2017.

“So, for sure, we need to make certain that he feels that the opportunity is going to be there. I’m pretty sure he does. He knows us well enough.”