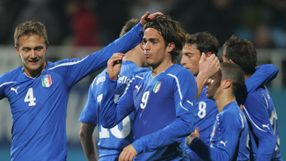 Villarreal striker Rossi, who have flattered to deceive for Italy in the past, shone throughout the game and fired his side into the lead on the 28th minute when he scored from close range following a scramble after a swift counter-attack.

Though Italy lost substitute Davide Astori to a 75th minute red card and the Ukrainians pressed hard, the visitors wrapped up victory with Alessandro Matri's first international goal in the 80th minute after the defence was caught stretched.

Ukraine, whose caretaker coach Kalitvintsev now risks being replaced ahead of the nation co-hosting the Euro 2012 finals, had started brightly with Yaroslav Rakytskiy rattling the post in the first minute with keeper Emiliano Viviano well beaten.

"We would have controlled the game but for the anarchy in our penalty area," Kalitvintsev, whose job has been linked in the media with former Italy coach Marcello Lippi, told reporters.

He said injuries had kept many players out of the side.

"But it makes no sense to talk of whether they could have helped. We were as good as our reserves allowed," he said.

Italy, with one foot in the Euro finals after Friday's 1-0 win in Slovenia, took advantage of Ukraine's early attacking groove to catch the home side on the hop.

American-born Rossi, following a cross from Domenico Criscito and a blocked attempt from Alberto Aquilani, clipped the ball into the net.

Ihor Oshchypko scuffed a golden opportunity to level after Viviano failed to deal with a corner from Gusev.

After Astori was sent off, the Ukrainians pressed again but then Sebastian Giovinco picked up the ball on the edge of the area and flicked it to Matri who curled into the far corner.

Italian coach Cesare Prandelli, who rested seven players but had main centre-back Giorgio Chiellini taken off injured in the first half, was partially happy with his team.

"I asked my players to play more aggressive football despite the fact it was a friendly game. It was even more pleasant to claim victory after we had been reduced to 10 men," he told reporters.

"I had an opportunity to see a few players in action. I am not happy with the performance of some players in midfield. They have to concentrate more in some episodes."