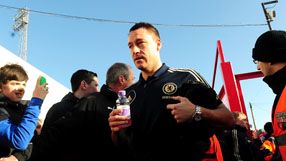 Captain Terry started his first game since returning from a knee injury in the 2-2 draw with third-tier Brentford on Sunday and was clearly not impressed.

"It was always going to be hard. The pitch was a bit worse than we thought, but no excuses," Terry told Chelsea TV.

"We're really disappointed, and even though it's great to be back personally, on a team performance we should be winning the game and now we make it difficult for ourselves with a replay.

"We have another game we could do without but we should beat them at the Bridge. I was disappointed because we didn't fight and they wanted it more than us."

Only a late equaliser from Fernando Torres spared Chelsea an embarrassing exit against Brentford following their League Cup semi-final defeat by Swansea City.

Chelsea were eliminated from the Champions League at the group stage and are a distant third in the Premier League.

Terry's knee injury meant he has hardly featured since Rafa Benitez replaced Roberto Di Matteo as coach, but now he is back he wants a big improvement against Reading in the Premier League on Wednesday.

"It's disappointing going to Swansea and not scoring over two legs, then being lacklustre [at Brentford]," he said.

"We came [to Brentford] and didn't create too much. Fair play to them, they played well but we need to liven up a bit and realise the importance to the fans and the club.

"Champions League football is a must next season. It's difficult but we have a squad and it's down to the players who come in to rotate and play well."

Goalkeeper Petr Cech and central defender David Luiz are both ruled out for the trip to Reading.

Cech has a calf injury and may return for the match at Newcastle United this weekend but Luiz is expected to miss both games due to a calf problem.