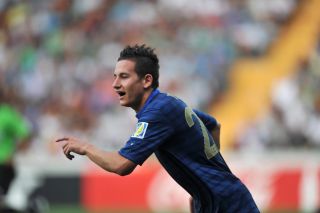 The 20-year-old winger signed for Lille in January from Bastia, but is yet to make his debut for the club after spending the second half of last season back at the Stade Armand Cesari and seeking a transfer upon his return.

Marseille, as well as Arsenal and Newcastle United, have been heavily linked with Thauvin - who was a member of France's successful FIFA Under-20 World Cup squad in the close-season - however Lille have stated they are not prepared to sell to their rivals.

Lille president Michel Seydoux has expressed his confidence that the player will remain at the club, however, on Tuesday sporting director Frederic Paquet admitted the player had failed to turn up for training in an attempt to force a move away.

"I can confirm that Florian Thauvin did not come to training this morning," he said. "He told the coach this weekend. We have taken note.

"We are suffering because of a choice involving himself and his entourage. It is sad he has made that choice, but now we must wait until the end of the transfer window.

"As for sanctions, as an employee he will obviously not be paid if he is not working.

"We are determined our position will remain the same, despite his absence."

Thauvin played 32 times for Bastia last term, scoring 10 goals, catching the eye with some stunning late-season form - in which he scored six times in his last eight appearances of the campaign.