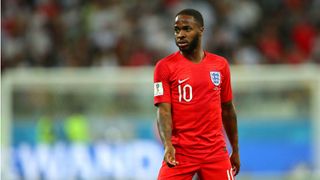 England winger Raheem Sterling has hit out at his treatment in the tabloid press, saying "they want to pull you down".

Sterling has been dogged by negative headlines during his career so far, covering everything from the purchase of a house for his mother to a controversial gun tattoo in tribute to his father.

But the Manchester City star, who scored 18 goals as the club won the Premier League last season, insists the media have got him wrong.

Writing in The Players' Tribune, Sterling said: "It's sad that I even have to say this, but I'm going to say it anyway. There’s a perception in certain parts of the media that I love 'bling'. I love diamonds. I love to show off.

"I really don't understand where that comes from. Especially when I bought my mum a house, it was unbelievable what some people were writing. I think it's really sad that people do that. They hate what they don't even know.

"But now, as long as my mum and my sister and my kids don't have any stress, I'm good.

"If people want to write about my mum's bathroom in her house, all I have to tell you is that 15 years ago, we were cleaning toilets in Stonebridge and getting breakfast out of the vending machine.

"If anybody deserves to be happy, it's my mum. She came to this country [from Jamaica] with nothing and put herself through school cleaning bathrooms and changing bed sheets, and now she's the director of a nursing home.

"And her son plays for England.

A team sheet leaked on Thursday appeared to suggest Sterling could be dropped for England's clash with Panama after struggling to make an impact in their World Cup opener against Tunisia.