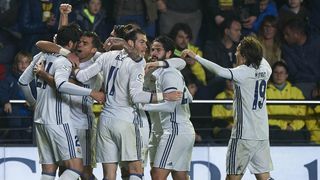 Real Madrid's 33rd La Liga title triumph was confirmed on Sunday as they defeated Malaga thanks to Cristiano Ronaldo and Karim Benzema.

The 2-0 victory ensured Madrid held off Barcelona in a thrilling race for the Spanish title, their first since 2012, winning the league by three points.

After Barca and Atletico Madrid had spells at the top of the table, Madrid have led the standings all the way since the ninth week of the season.

There have been many crucial steps on the road to glory, but we have narrowed things down to five pivotal matches.

Madrid came into October's match away to Betis under pressure having drawn four consecutive matches, three of which had been in the league, while key stars Luka Modric, Casemiro and Sergio Ramos were all injured.

But the strain did not show as they obliterated the hosts with a stunning first-half performance that saw them score four times.

Toni Kroos set up goals for Raphael Varane and Benzema as Madrid took charge, before Marcelo and Isco strikes ensured the lead was four at the break.

Alvaro Cejudo got one back for Betis, but Isco scored a delightful second and Ronaldo wrapped up an emphatic victory.

Having got back on track, Madrid moved into top spot with a win over Athletic Bilbao the following week, a position they would not relinquish for the rest of the season.

6 - Real Madrid have scored six goals in an away game for the first time with Zinedine Zidane as manager (all competitions). Toast. October 15, 2016

The first Clasico of the season lacked the drama of the second that was to follow later in the campaign, but it was crucial in Madrid's march to title glory.

Zidane's men held a six-point lead over Barca going into the game, but looked like they were falling to a damaging defeat with Luis Enrique's side ahead going into the final minutes courtesy of a Luis Suarez header.

But after being thrown into attack in a last-ditch move, Ramos latched onto Modric's free-kick and scored a 90th-minute header as Madrid snatched a 1-1 draw to preserve their advantage at the top of the table.

It was Ramos' first goal at Camp Nou for almost 10 years and extended Madrid's unbeaten start to the season, which would continue for another six weeks.

Just four days on from a surprise 2-1 loss at Valencia, Madrid were staring down the barrel of another damaging defeat as quick-fire goals from Manu Trigueros and Cedric Bakambu put the hosts 2-0 ahead at Estadio de la Ceramica.

But Zidane's men provided an emphatic response with three goals in 19 second-half minutes to regain top spot in La Liga.

Gareth Bale, who was returning from an ankle injury, started the comeback with a well-placed header, before the ever-reliant Ronaldo levelled with a spot-kick – which saw him become La Liga's leading penalty scorer.

The comeback was completed by Alvaro Morata with six minutes remaining when the Spain international met Marcelo's cross.

Hot on the heels of that Villarreal revival, Madrid were on the ropes again at home to Las Palmas.

Despite Isco's early strike putting them ahead, goals from Tana, Jonathan Viera and Kevin-Prince Boateng had Las Palmas on the brink of a stunning win at the Santiago Bernabeu.

However, Ronaldo once again kept his cool from 12 yards in the 86th minute after Javi Castellano was penalised for handball.

And the Portugal superstar completed another dramatic fightback in the last minute of normal time with a powerful header from James Rodriguez's corner to secure what proved a crucial point.

For long parts of the season, Sevilla had threatened to make it a three-horse race with Madrid and Barcelona for La Liga glory and they provided, on paper at least, a stern test for Madrid in their third-from-last match.

But what followed was a devastating display from Los Blancos in a result that saw the life ebbing away from Barca's title hopes.

Nacho stroked home a contentious, quickly taken free-kick to put Madrid into a 10th-minute lead and Ronaldo tapped in from Rodriguez's saved effort to double their advantage.

Stevan Jovetic had hit the woodwork twice before reducing the deficit shortly after the break, but Ronaldo's stunning strike in the 78th minute coupled with Kroos' late effort calmed any Bernabeu nerves.