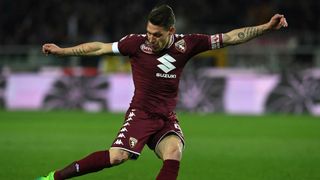 AC Milan are interested in making an ambitious move for Andrea Belotti, but Torino director Gianluca Petrachi does not believe a Serie A rival can afford the striker.

The Italy international is one of the most sought-after centre-forwards in Europe after scoring 25 goals in the league this season.

Belotti's contract contains a €100million release clause, but it can only be activated by clubs outside of Italy.

Petrachi met with Milan director Massimiliano Mirabelli on Wednesday and the Rossoneri's interest in Belotti was discussed.

Milan were last month purchased by a Chinese consortium, but Petrachi expressed doubts that any team in Italy can meet his valuation and advised Belotti to continue his development in Turin.

"Mirabelli told me than Belotti is a player he is particularly interested in.

"I have also advised Belotti to remain at Torino for another year to grow and mature.

"If a top club were to arrive that targets the Scudetto, he could leave, otherwise he is staying with us.

"Are Milan a top club? In terms of history yes, but today they are not challenging for the title.

"It's unlikely an Italian club will have the money to buy him. Andrea will only leave for a top club."