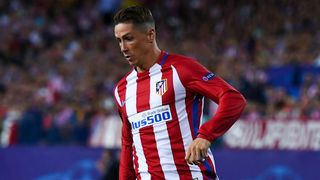 Fernando Torres believes Atletico Madrid have taken a step towards one day winning the Champions League, despite losing to Real Madrid in the semi-finals.

After finding themselves 3-0 down following the first leg at the Santiago Bernabeu last week, Atletico threatened to pull off an improbable comeback but could only manage a 2-1 win as they were eliminated 4-2 on aggregate.

Wednesday's clash was a chance for revenge against the defending champions, having twice suffered losses to Madrid in the final of the competition in 2014 and 2016.

However, veteran forward Torres is adamant Atleti are on the right track for European glory following their spirited display.

"We must be happy for the commitment the players showed, for their effort and their work, and for the relationship with the fans," the 33-year-old told reporters.

"We have all won tonight [Wednesday], we have taken another step in belief. [Winning the Champions League] is possible.

"I have witnessed very different stages at Atleti, and this is the beginning of something big."

"This is not our ceiling, we are in one of the great moments of our history," he added.

"Now we have to take another step, on another stage."