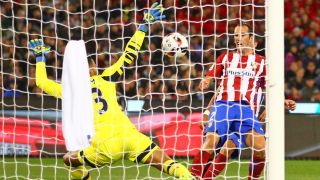 Tottenham suffered their second International Champions Cup defeat of the week as they went down 1-0 to Atletico Madrid in Melbourne.

Mauricio Pochettino's side, beaten 2-1 by Juventus on Tuesday, lost to last season's Champions League finalists by virtue of a first-half goal from Diego Godin.

Spurs looked livelier in attack than they had against Juve and hit the crossbar and post in the first half before Godin prodded in what proved to be the winner five minutes before the break.

Jan Oblak made two fine saves in the second half, but Atleti began to assume some control as the match wore on, as Pochettino and Diego Simeone made a number of substitutions.

Substitute Amath Diedhiou twice came close in the closing minutes for Atleti, but Godin's goal was enough to give them a win ahead of Sunday's friendly match with Melbourne Victory.

Tottenham twice hit the woodwork in a first half in which they showed plenty of endeavour against a strong Atleti starting line-up.

Josh Onomah rattled the crossbar with a fierce half-volley from six yards out, before Erik Lamela steered a shot onto the post after being teed up by Vincent Janssen.

Atletico recovered their composure as the half wore on, and they snatched the lead five minutes before the interval. Anton Walkes failed to clear Gabi's flighted free-kick, and Godin was on hand to prod the ball past Michel Vorm and into the net.

Spurs were the dominant side early in the second period, and it took a fine reflex stop from Oblak to deny Ryan Mason, who let fly on the half-volley after surging into the penalty area.

Oblak then denied Janssen a first Tottenham goal as he tipped the Dutch striker's free-kick around the right-hand post, after Mason had been felled on the edge of the box.

Atleti looked more comfortable as both teams called on a number of substitutes, and Diedhiou came close to a second for Simeone's side with a deflected shot that dipped just over the crossbar, before another effort that bounced wide.

Tottenham could not muster a final chance to level the scores, and they will now prepare for a clash against Inter in Oslo next week.