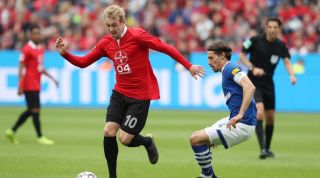 The Spurs midfielder is entering the final year of his contract and has been linked with a summer move to Real Madrid or Barcelona.

According to the Daily Mail, Germany international Brandt is being monitored by the Premier League club, who could make a move if Eriksen departs at the end of the season.

The 23-year-old, who is said to have a £21.5 million release clause in his contract, has provided 14 assists and six goals in the Bundesliga this season.

Tottenham, however, will wait until after the Champions League final against Liverpool on June 1 before turning their attention to the transfer market.