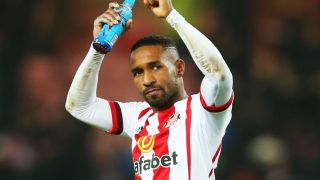 Defoe scored 138 times in 357 appearances across two spells with Tottenham, and returned to the Premier League with Sunderland 12 months ago after a spell at MLS club Toronto FC.

The prolific 33-year-old helped Sunderland stave off relegation last season, and is doing his best to repeat the trick this term, with five goals in his last two Premier League games inspiring Sam Allardyce's side to back-to-back wins over Aston Villa and Swansea City.

Sunderland now sit just one point behind 17th-placed Swansea, and Tottenham midfielder Son - who came off the bench late in Wednesday's 1-0 defeat to Leicester City - is wary of Defoe's talents.

The South Korean told Spurs' official website: "I think Sunderland are a very good team, they have a good striker in Jermain Defoe, an ex-player of Spurs, but we must look just at us.

"We play very well, normally we have a very good defence, we work very hard for the other team to stay at zero goals and for us to win.

"We also have a very good offensive side - it's not easy but we will try everything to get the three points on Saturday."

Another attacking threat Tottenham must contend with is Jeremain Lens, with the Netherlands winger having battled his way back into the starting XI following a rocky start to life under Allardyce.

"I had a difficult time," he told Sunderland's official website. "Last week [Sunderland's FA Cup third-round defeat to Arsenal] was my first 90 minutes for three months.

"I'm happy with that. Hopefully I can continue this, start playing more games, be important for the team and help them win games."

Defoe and Lens will not be joined in attack by Dame N'Doye, Allardyce's new loan signing from Trabzonspor who is waiting for formalities related to his visa to be completed.

Tottenham's Mousa Dembele (ankle) will hope for further minutes on the field after returning as a substitute against Leicester, but England midfielder Ryan Mason (ankle) is still out alongside Clinton N'Jie (knee).