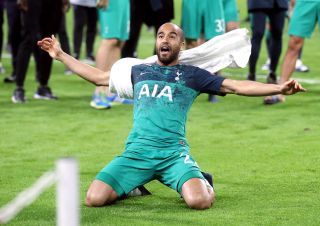 Liverpool’s astonishing win over Barcelona was a Champions League tie for the ages – but Tottenham may have trumped them with what could be the competition’s greatest comeback.

Spurs trailed 3-0 on aggregate with just 35 minutes plus stoppage time remaining against Ajax in Amsterdam, only for Lucas Moura’s hat-trick to sensationally see them through to the final.

That is the latest a team have trailed by three goals before winning a knockout tie in the Champions League era – trumping Liverpool’s memorable 2005 final in Istanbul by one minute.

The Reds’ own efforts against Barcelona rank fifth on the list – their three-goal deficit lasted only until Divock Origi’s seventh-minute opener at Anfield, giving them 83 minutes for a fightback completed by Georginio Wijnaldum’s brace and Origi’s second goal.

Monaco trailed Real Madrid 5-2 on aggregate going into first-half stoppage time in their 2004 quarter-final, before Ludovic Giuly sparked their comeback to win on away goals.

Barcelona trailed Paris St Germain 4-0 after the first leg of their last-16 tie in 2017, so have their own claim to the greatest comeback on that basis. They were still three down with 49 minutes remaining in a second leg they eventually won 6-1.

They also overturned an early three-goal deficit to beat Chelsea 6-4 on aggregate after extra time in their quarter-final in 2000, but have often been on the receiving end.

Indeed, lightning has struck twice in successive seasons for the Catalan giants as Liverpool’s comeback happened just a minute quicker than Roma’s similar effort in last year’s quarter-final. Roma lost 4-1 in the Nou Camp but won the return leg 3-0.

Deportivo La Coruna’s famous win over AC Milan in 2004, having lost the first leg 4-1, saw them complete their comeback in 85 minutes after Walter Pandiani’s fifth-minute strike in the second leg.