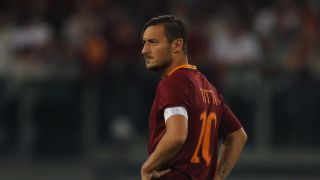 Roma icon Francesco Totti has confirmed Sunday's Serie A encounter against Genoa will be his last match for the club.

The 40-year-old's contract expires at the end of the 2016-17 campaign, with sporting director Monchi announcing at his presentation in March the forward would retire and take up a director's role with Roma at the end of the season.

Totti did not initially clarify his future, but has now declared this weekend will represent his farewell in Roma colours.

The former Italy international did not reveal what his next step will be, though he is desperate to remain in the game and is looking forward to a "new challenge".

"Roma-Genoa, Sunday 28th May 2017, the last time I can wear Roma's jersey," Totti wrote on his official Facebook page.

"I can't tell you in a few words how much these colours meant, mean and will always mean to me.

"I just feel that my love for football never fades: it's a passion, my passion. It's so deep I can't imagine not fuelling it any longer. Ever.

"From Monday I'm ready to go again. I'm ready for a new challenge."

A capacity Stadio Olimpico crowd of 68,530 will witness Totti's last appearance for Roma after over 24 years with the first team.

Posted by Francesco Totti on Thursday, 25 May 2017