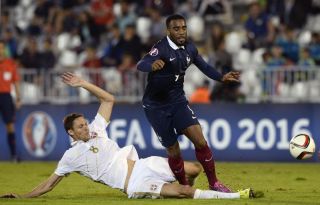 The pair have been in fine form for Sevilla and Lyon respectively, with Tremoulinas enjoying a strong start to life in Spain following his move from Dinamo Kiev, helping to fill the void at left-back following Alberto Moreno's switch to Liverpool.

Promising youngster Layvin Kurzawa had been expected to gain a place in the squad following Patrice Evra's injury, but Tremoulinas is preferred ahead of the Monaco man.

Lacazette has 10 goals in 12 Ligue 1 appearances for Lyon this term and is level at the top of the goalscoring charts in the French top flight with fellow international Andre-Pierre Gignac.

Cabella has struggled for starts of late at Newcastle United while Remy picked up a groin injury for Chelsea in their 6-0 win over Maribor in October.