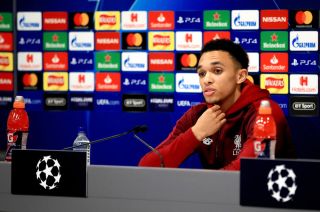 Three years ago Trent Alexander-Arnold watched from the stands at Anfield as Liverpool produced another remarkable European comeback to beat Borussia Dortmund.

On Tuesday the England international will be on the pitch trying to replicate a similarly difficult task as they seek to overhaul a 3-0 deficit from the first leg of their Champions League semi-final against Barcelona.

Back in April 2016 Liverpool faced their Bundesliga opponents on the back of an encouraging 1-1 draw in Germany.

However, they found themselves 4-2 down on aggregate with 24 minutes remaining but edged through with an added-time winner from Dejan Lovren.

“I was here as a fan. It was one of those special nights. You always remember where you are when those games happen,” said Alexander-Arnold, who sat out the first leg as manager Jurgen Klopp surprisingly selected Joe Gomez at right-back.

“I am sure the fans will believe we have it in us to score that many goals and not concede.

“Realistically it is a really uphill battle for us but it is important to have that belief.

“It is a slim possibility but the possibility is still there. We have got to go out there and be fearless.

“The only way to get the result is to not hold back. If we get caught up thinking about the players they have got, it is not going to work.”

Of more concern to Liverpool at the moment is the absence of their key players.

Leading scorer Mohamed Salah has been ruled out with concussion and with Roberto Firmino out with a muscle tear the Reds have only Sadio Mane left of their feared front three.

However, Alexander-Arnold remains optimistic they can handle being without their 26-goal talisman.

“I don’t think it will feel that strange,” he added.

“We train with different line ups and different players in different positions. It is something we do in training as well.

“We have got two of our main goalscorers off but it also presents an opportunity for others to make themselves heroes and if we do overturn the deficit, whoever scores, their name will always be remembered because it will be a really special night.

“The lads who maybe don’t get as many minutes will be looking to take the opportunities.

“I am sure whoever comes in will have an understanding with all the players.

“The main thing is to have that versatility and squad depth that whoever comes in can do a job.”